The following is just some of the cut or altered material we’ve found working with a Monkey Island source repository over the past two weeks, with an emphasis on lost art. There is still a lot in code that could be reconstructed, to make playable “deleted scenes.” It is also possible that other source repos survived that have additional pieces that we don’t.

Cut feature restored: Random pirates entered and exited the SCUMM Bar, on their way to or from Low Street. We believe this cut was for performance reasons. Note that for the sake of demonstration, I’ve increased the frequency of pirate spawns above what they likely were meant to be.

An old layout of the SCUMM Bar, where the back kitchen was part of the same screen. In the final game, the kitchen is its own screen, and is presented in a different perspective. Also, the blades on the kitchen wall were removed.

This animation of the troll bridge collapsing exists in its art file. We have no evidence in code for what may have triggered this to happen.

This dancer “costume” file survived in the source code. It’s unknown whether this was meant to be a character in the game, or was merely a sketch, but her peg leg makes it clear that this is from the Monkey Island project!

Restoration of an early version of the “Dock” room. It turns out the crane on the leftmost building had a function at one point in the game’s design!

An early design for the character that ultimately became Governor Elaine Marley.

The Idol room! An early design for the game had Guybrush solving a series of puzzles in order to steal the idol from the governor’s mansion. When David Grossman jokingly suggested instead that a comedic scene should play out where all of this happens behind the scenes, Ron Gilbert loved the idea and had him implement it. This sketch is all that survives of the original puzzle…and gives us our first glimpse at what might be in the rest of the mansion!

At one point in development, Guybrush would have paddled his row boat outside of Monkey Island, and approached its beaches from outside their shores. In addition to being an interesting cut, this provides us with an added benefit…

…because this gives us the missing pieces of the Monkey Island composite image! Here, for the first time, is the entirety of the original art.

An unused drunk pirate character for the insult sword-fighting portion of the game. No code survives for his behavior, or to suggest that he had unique dialogue.

A beautiful early sketch of Captain Smirk, likely by Steve Purcell. This image, along with the sketch of Elaine above, somehow survived exclusively in the repository for the original game’s French translation! And frustratingly, the file name is HEADS6.LBM…were there five more?

Meet Governor Fat! This character was the main antagonist in the earliest surviving story concept documents, back when the game was known as “Mutiny on Monkey Island.”

What remains of a very early version of the governor’s mansion, looking a lot more…Maniac-al. 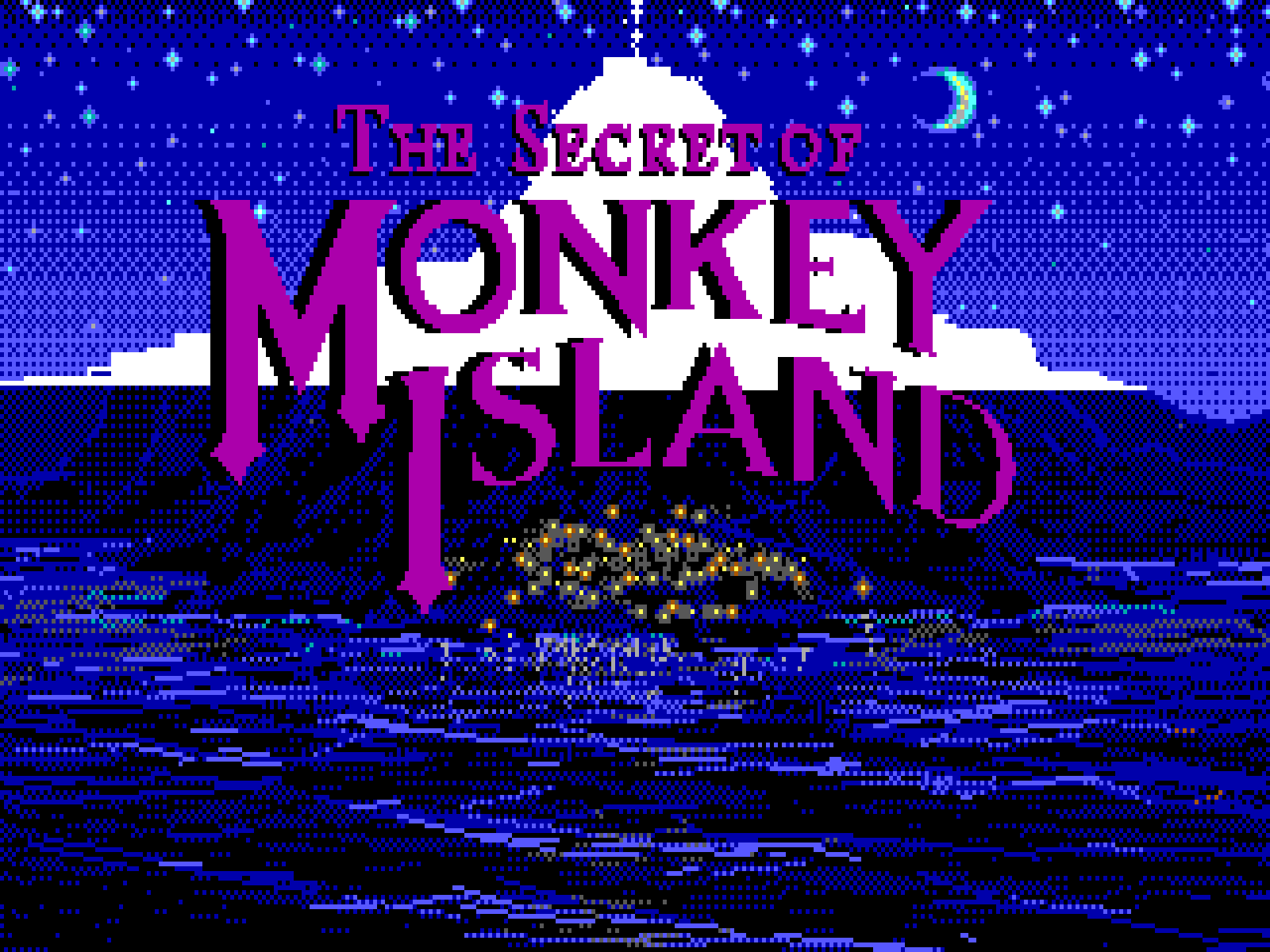 Reconstructions of two early title screen treatments. In the game we would have also seen the floating mist, as we see in the final game, but this is not represented here.

A recreation in code of the animated fireplace on the final game’s title screen. The art and animation timing survived in the source repository, but were commented out and not compiled into the game. It’s possible the animation was cut for performance reasons. Note: the cloud mist has been lowered in SCUMM to the approximate location seen in an early promotional photograph of the game, but we don’t have any forensic evidence of their EXACT position.

A sketch of a pirate character, found hidden in what we believe to be one of the earliest animation files that survived. In the early “Mutiny On Monkey Island” concept, the game’s protagonist wasn’t a wannabe pirate, it was a washed-up pirate trying to regain his glory. Perhaps this is a vision of that original concept?

Buried deep in the animation files, in frames that are never called by code…the walk cycle for a very early Guybrush!

A female pirate, with a design similar to the early Elaine. It is unclear what this might have been meant for in-game, if anything, as the file name is simply SPRITE.

Animations for a sword fight with Sheriff Fester Shinetop that never happens in the game. Code suggests that this may have taken place in the church.

And last but not least…a completely functional room, restored using SCUMM and FLEM! In the final game, Guybrush walks straight into the cannibal village from the map screen, but in an earlier version, he would have gone through this gruesome trail first. Don’t miss the animations for the smoke in the background and the dripping leg!

Stay up to date

The Video Game History Foundation is a 501(c)3 non-profit organization dedicated to preserving, celebrating, and teaching the history of video games.

For comments, questions, or media inquiries, send us a note at info@gamehistory.org.