It’s being widely-circulated that today is National Video Games Day. It’s so widespread that as I write this, #VideoGamesDay is trending on Twitter. Game, one of the UK’s largest video game retailers, is basing a sale around it (despite its “national” origins being in the U.S., but we’ll get to that!). Chuck E. Cheese is also having a tie-in promotion today, which is making ABC’s Arizona affiliate really, really excited.

But what is National Video Games Day, and why is it September 12? Is it the anniversary of some major video game milestone? Maybe it’s Ralph Baer’s birthday? Is it the day Pong was released?

As it turns out, there are multiple websites dedicated specifically to explaining the history behind days like this. Unfortunately, none of them had any real answers for National Video Game Day. Not one of these sites could explain the history of the day. One of them gave up mid-paragraph and tried to sell me popcorn instead.

National Video Games Day is so poorly documented that the internet can’t even agree on the date: some sources say July 8th, others say September 12th. Some websites even claim these days are two distinct holidays.

A cursory glance through digital newspaper and magazine archives brings up a few hits going back to the early 1990s (some claiming July 7th or 8th, some claiming September 12th), but none explained the date’s origins: they simply repeated the date, and often used similar language involving “cartridges and quarters,” well past the point where those words had much to do with video games anymore. Note this blurb from 2008’s  The Teacher’s Calendar School Year:

And note this very similar blurb from the July 7, 1992 edition of The Hanover Evening Sun in Pennsylvania, 16 years earlier: 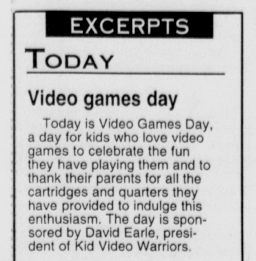 Now we’re getting somewhere! We now have a name to associate with the day: David Earle, president of Kid Video Warriors. Digging a little further, and with this new information, we can trace the origin back one year further, to 1991:

This is from the 1991 edition of Chase’s Calendar of Events, a publication that still exists. There is no mention of a “Video Games Day” in either the 1989 or 1990 editions of the book, and we can find no newspaper references to it earlier than that year, so I feel confident in proclaiming that:

Glancing through the rest of the Chase’s editions throughout the 1990s, we see David Earle and either “Kid Vid Warriors” or “Kid Video Warriors” attributed as the date’s “sponsor” up through 1996, with varying dates:

Starting in 1997, the date settles in to being September 12th. However, this is also the first time that Earle is no longer listed as the date’s sponsor – in fact, there is no sponsor or accompanying information provided at all, for any of the dates: 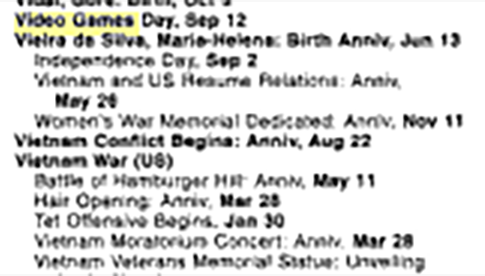 (Sorry for the poor quality, that’s the best I can get out of Google Books, and the nearest library that has it is 150 miles from here)

Did Earle provide that date, but go uncredited? Did Chase’s decide to arbitrarily bump it by two days? Was it a typo that just kind of stuck around? No matter which it was, it seems pretty clear that Chase’s is the origin of Video Games Day, and that:

Furthermore, we know how dates got into Chase’s: a “sponsor” submits them directly to the book, and assumes the responsibility for promoting that day. Meaning we can make one final observation:

Unfortunately the trail runs cold here. There is no trace left on the internet to tell us what “Kid Vid Warriors” was. There are several hits for people named David Earle, but without knowing anything about the guy (a location would help!), there’s no way to find him without cold-calling every David Earle in the world.

But don’t let that deter you! Today on National Video Game Day, while you’re enjoying the distinct crunch of Colorado Jack Popcorn and bringing out the Kid Vid inside of you, don’t forget to raise a glass and honor David Earle. Whoever he is.

Update (9/13/2017): An earlier version of this story incorrectly stated that a Chase’s event sponsor had to pay to include an entry in the book. The text has been updated to fix this oversight.